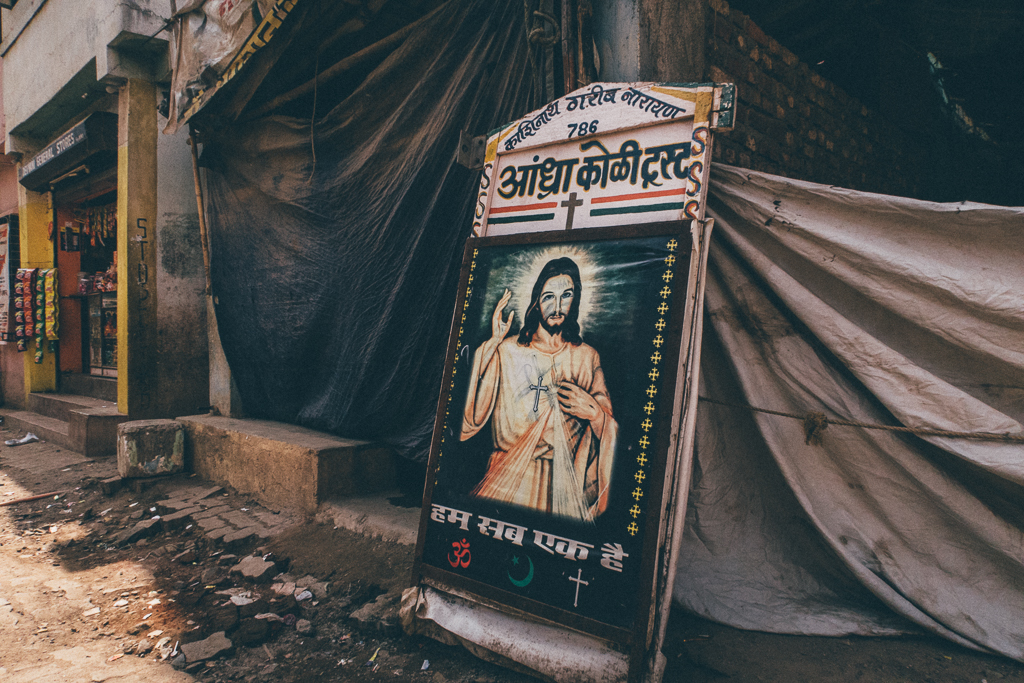 In a country where religion and religious practices have been rendered into national projects, this photo essay provides an alternative way of seeing forms of faith and processes of inhabiting a big city. Mumbai, a city with continuous flows of people and their cosmologies, beckons a range of religiosities—those that cannot escape your attention and others folded into nooks and crannies of different kinds of street surfaces. Ganpati festival, Muharram and Dahi Handi emerge as spectacles through which communities mark their space and time in the city. This set of photographs moves away from the spectacle to the everyday life worlds, materialities, visual cultures and modes of worship of places and regions beyond the city of Mumbai, which continuously seep into it. As migrants try to build their lives in this unforgiving city, they believe that the eyes of their deities continue to watch over them. Those eyes are often literally looking at you from the unlikeliest corners and prominent perches. The deities, which have come riding in the hearts and minds of people from across the subcontinent, have found new addresses in homes, workplaces and public places.

Thousands of shrines of varying sizes reside in the streets of Mumbai. These shrines act as markers of new settlements and localities. Most of them represent and embody the identity of the people who brought them here. But more often than not, they hold together the hopes and aspirations of migrant communities as they navigate the precarity of the life worlds that a city like Mumbai generates. The shrines act as magnets, drawing together people with shared backgrounds and attracting sometimes a set of new believers. They belong to different streams of faith, ranging from organized religions to folk, tribal and occupational forms of worship. Many of these are exclusively cared for by women like the Velankanni Matha shrines. On the other hand, roadside Hanuman shrines seem to be a favourite of young migrant men who live alone or in groups in the city.

These shrines have a treasure of stories, mythology and folk tales riding on them. The Pochamma Panduga, an important festival in Telangana, is celebrated by several communities from this part of the Deccan in Mumbai. The cultural and spiritual centre of these communities is in Kamathipura where the first wave of migrants from that region settled during the construction of colonial-era buildings like the Victoria Terminus. During the festival, held towards the end of the annual monsoon, people of the community who are now settled all across the Greater Mumbai region congregate at a temple in the heart of Kamathipura. Govandi, a settlement with working-class migrants from Uttar Pradesh, experiences similar congregations, drawing people from beyond the locality, during Muharram.

The images that follow take you on a walk through different parts of Mumbai, providing glimpses of the ordinary sacred, discreetly folded into the everyday life of the city, through deities stuck on a wall or an auto, set in a clearing in a street corner, discarded under a tree or even carried on one’s own body. Continuities of grace, of familiarity and of memory all hold themselves in these shrines. Yet, these deities that have travelled with migrants also disrupt a singular identity of the city, defying institutionalized boundaries that separate the sacred from the profane, and the shrine from the public, infusing the city with their multiplicities and moulding themselves to find new homes and new intimacies in the city.

All images © Mumbai Paused, aka Gopal MS. Cover image ‘From coastal Andhra to Versova’, also by the author.

View all posts by Chiragh Dilli